Search
X
My Account
Basket (0)
You have no items in your basket
Subtotal €0.00
View Basket Checkout
Search
X

The best selection of top mexican recipes for you to cook at home. 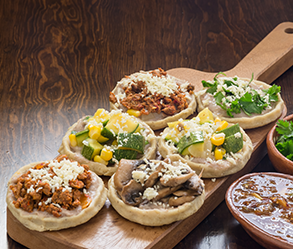 In Mexico there are endless dishes made from corn dough, but all of them stand out in the sopes. So in this post you will learn how to make sopes. There are many ways to prepare them according to the region of the country, and also each cook puts his personal touch on the type of stew and garnish according to their preference. To the dishes of this type we call them snacks.

The sopes are some thick, medium-sized tortillas, which after boiling are pinched along the edges. This edge that is formed when pinching the edges helps us to avoid spilling the fillings that we put. In some parts they are prepared in a round manner; in others, oval; guys or huge.

In some supermarkets they already sell them, so the housewives only have to heat them up and fill them. The sopes can be fried in oil or pork lard, or only cooked on the comal without any fat. The most popular fillings are: refried beans; chicken, pork or beef carcasses and sometimes stewed, with sauce, lettuce or cabbage and fresh cheese.

How to make ‘Sopes’?

Ingredients for 10 ‘Sopes’ For the Corn dough:

• 1 ½ cup of shredded chicken or beef

• Red or green sauce to taste

• 1 avocado split into cubes or slices

1.Mix the corn flour with the warm water in a medium bowl and knead until it is very well integrated. If necessary, add more water, but little by little, from tablespoon to tablespoon, until the dough is smooth and very manageable. (The dough has to be soft but not sticky). Sometimes the humidity of the area where we live makes our dough get a little; If this is your case, add a little more corn flour. Cover the dough with a damp cloth napkin to prevent it from drying out.

2. Divide the dough into 10 balls of the same size and cover them again with the kitchen napkin. 4. Cut the plastic bag into two equal squares. Place a piece of plastic in the tortillera and put a little ball of dough on top; cover with the other piece of plastic and close the tortilla by gently pressing the handle to form a medium-sized thick tortilla.

6. Place the tortilla on the hot comal with a quick movement. In a matter of a minute, turn the sope to cook on the other side. (Do not let it cook long because the dough will dry). Turn over to cook for another minute. Give one last flip that will be 20-30 seconds of cooking approx. Remove the sope of the comal with the help of a small stick and place it on a kitchen napkin to keep it warm. Let it cool for only about 45 seconds and then begin to form the edge by pinching the edges with your fingers. Return the sope to the napkin, and continue cooking the others. TO SERVE THE SOPES:

1. Heat oil or pork lard in a pan (or a comal). Place the sopes in the pan and fry lightly for 30 seconds on each side; that will be enough time to warm them and to brown them a little. Remove the sopes from the pan and put them on a plate covered with paper towels to absorb the excess fat.

2. Now, to put the beans, the meat of your preference, the lettuce and any other ingredient that you have selected as a filling or garnish. Serve them with sauce to your liking. We use cookies to ensure that you receive the best experience possible whilst you use our website.